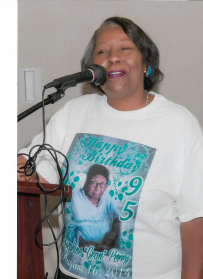 AND BOARD OF DIRECTORS PRESIDENT

Marie D. Lewis is a native of New Orleans, Louisiana and educated in the New Orleans Public School System.   She is a graduate of Booker T. Washington Senior High School, Class of 1967.  She worked in a New Orleans Training Program at various sites until 1970.   Marie secured a job with the United States Government at the Public Health Hospital in January of 1970.  At Public Health Hospital, she worked as an IBM keypunch operator, a ward clerk, and finally as secretary of Social Services, Psychiatry and Alcohol Detoxification.  When the hospital closed in 1981, Marie was called to work for the State of Louisiana, where she worked for six month, helping with the transition of Public Health Hospital into a State Hospital.  Marie then went back into federal government service and worked for the Social Security Administration.  During her time with the Social Security Administration, Marie worked in the Office of Hearings and Appeals, now the Office of Disability Adjudication and Review.  During her 30 years at the Office of Disability Adjudication and Review, Marie has performed the duties of a clerk, senior case technician and retired as a paralegal analyst, writing disability decisions for the Administrative Law Judge.  Although Marie is retired from the federal government, she works part time as a private contractor.  She founded Seeds of Faith Equals Deliverance out of her pain, when her second son, Adam Smith, was murdered on the streets of New Orleans.  She realized that there are a lot of young men like Adam, who could do things with their hands but could not get a good paying job because they needed formal training and would have problems passing tests.  So her goal is to help by “SOWING INTO THE LIVES OF OTHERS THROUGH EDUCATION AND TRAINING/HELPING THEM OBTAIN A BETTER QUALITY OF LIFE.”

Seeds of Faith Equals Deliverance.org and it's partners are doing a food box giveway on Fridays for the lower 9th ward community. your help would be appreciate contact us.